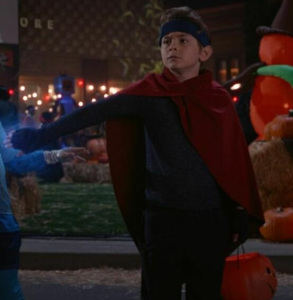 In the latest installment of WandaVision, these Halloween costumes reference other comic book characters and also offer something for kids. In a brand new Halloween lair! Billy Maximov also wears a minimal but curious costume that should be well known to comic book readers. In fact, Julian Hilliard, dressed like this, is a miniature version of Wiccan, a costumed character that in the comics belongs not to Billy Maximov, but to his reincarnation, Billy Kaplan… and the allusion to the boy’s magical powers suggests that he is also the Wiccan version of the MCU. Let’s look at it together.

Billy Kaplan was born in New York City, the first son of cardiologist Jeff Kaplan and his wife, psychologist Rebecca Kaplan. As a child, he and his two younger brothers received a Jewish upbringing in the family, but he didn’t exactly grow up as an Orthodox Jew (fortunately, his family was Reformed): he was gay, and this was blatantly obvious from an early age, making all the local bullies want to torment him, especially the biggest and meanest of them all, John Kesler. Billy was also a fan of superheroes and sat outside The Avenger Mansion, his personal hideout, whenever Kesler and his colleagues gave him a hard time. 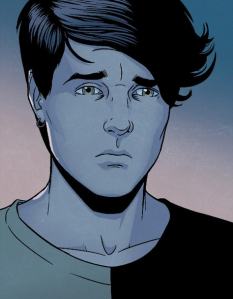 On one of those occasions, he met his favorite Avenger, Scarlet Witch. The heroine was kind and told him she was sure he could take care of himself. Inspired by her words, Billy went back to Kesler and confronted him…. Unfortunately, he was a mutant, and at that moment his electrical powers decided to manifest: as a result, he almost killed the tyrant. Startled, this time by his own powers, Billy tried to ask the Avengers for advice and help, but Earth’s mightiest heroes had just disintegrated. So he continued learning on his own, slowly mastering his powers. Some time later, he learned to his surprise that the late Vision had added his name to the Avengers’ security program, a program designed to monitor and track promising teenagers with superpowers who would be recruited into the new team if the Avengers were destroyed. Iron Lad, a mysterious time traveler, used the program to find people he could recruit for the team he was creating, the Young Avengers, and Billy was one of the first people he contacted. Billy wanted to use his superhero talents and gladly accepted the offer. Since he could fly and fire electricity, he decided to call himself Thor and go by the name Asgardian. With the young Avengers, whose first mission was nothing less than to repel Kang the Conqueror, Billy also learned that he had a natural affinity for magic, and thanks to a few books by Marie-Jo Altman, the mother of his teammate Hulkling, he learned how to alter reality to some extent. He also fell in love with Hulkling, and they started dating shortly after he joined the team.

The debut of the Young Avengers was quite eventful, and the team quickly lost Iron Boy, who turned out to be a younger version of Kang the Conqueror himself, but gained two new members in Statura and Hawkeye: it was the girls who suggested that he change his name from Deceitful Asgardian to Wiccan, and he eventually agreed. While Wiccan was busy saving the world, Billy Caplan was also busy telling his parents that he was a young superhero, but they interrupted him, assuming he was trying to tell them about his relationship with Teddy Altman (Hulkling), which they agreed to… Unfortunately, they didn’t realize that their 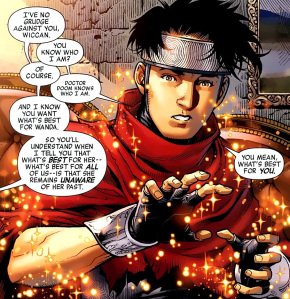 son was a wizard dating an alien shapeshifter. Everything became clear when Super-Skrull attacked both families and killed Mary-Jo while trying to kidnap Hulkling. What Super-Skrull failed to do, Sentinel Kree succeeded, and Billy’s friend was sent into space. Desperate to save him, Wiccan convinced the other Young Avengers that they needed reinforcements to do it. Jonas, the new Vision who joined the team, used the same Iron Boy program he previously used to find other teenagers with powers One of them was Tommy Shepard, a young man who inexplicably looked like Billy, but with white hair. After meeting and recruiting Tommy, Billy began to make assumptions about the true relationship between the two, but first he had to rescue Teddy: The Young Avengers flew into space and managed to rescue Hulkling from the clutches of the Kree and the Skrulls, then returned to Earth. But before Wiccan could learn more about his connection to the Sooner, S.H.I.E.L.D. captured all the Young Heroes under the Superhuman Registration Act; the Young Avengers were rescued by Captain America and Falcon, and joined the Secret Avengers. The Civil War was quite difficult for Wiccan: He ignored orders by helping and then recruiting the Fugitives, participated in the final battle between the two hero fronts, where he was immediately neutralized with Cape Town as the only two teleporters on the team, and was even arrested and imprisoned in Prison No. 42, from where he was released by Captain America and Hulkling posing as Yellowjacket. When the Civil War was finally over, Wiccan could concentrate on his investigation and follow the trail that led to the disappearance of the Scarlet Witch?

Billy Kaplan is a very serious and sensitive young man who sometimes carries the weight of the world on his shoulders, but who is always ready to do the right thing and protect those he loves, especially his friend and later her husband Hulkling. As a Wiccan, his powers first manifested in the form of “simple” electro-kinesis and self-propelled flight, but later revealed much more: he can manipulate reality with real spells that he first summoned through mantras and then mastered more naturally, and he is now a master of telepathy, teleportation, telekinesis, cryokinesis, pyrokinesis, clairvoyance, and much more. Wiccan, potentially one of the most powerful beings in the universe, seeks to understand his past in order to build a better future for himself and his loved ones.

Wicca is an Asgardian?

Is Hulkling connected to the Hulk?

Emperor Hulkling (Dorrek VIII, also known as Theodore “Teddy” Altman) is a fictional superhero appearing in the American comic books published by Marvel Comics. … The Hulkling character is modeled after the Hulk, with shapeshifting abilities far beyond the ability to mimic the Hulk, and superhuman strength.

Will Wiccan be on WandaVision?

In addition to his regular role as a member of the Young Avengers, Wiccan was also a member of Avengers Idea Mechanics, Strikeforce, and Guardians of the Galaxy. Billy appears in the Marvel Cinematic Universe Disney+ series WandaVision (2021), starring Julian Hilliard.