Spies in Disguise (2019) Movie Summary and Film Synopsis on MHM

Synopsis and plot of the film

Lance Sterling is a super spy working for H.T.U. (Honor, Trust, Unity, and Value). The scientist attached to his munitions is Walter Beckett, the exact opposite of Sterling. Sterling doesn’t think much of the peaceful way, in which Walter spies and rejects him. But when Sterling is accused by the evil Killian of stealing a top-secret drone, Sterling must turn to Walter for help. Unfortunately, Sterling turns into a bird after drinking one of Walter’s secret formulas. Sterling must not only clear his name, he must do it as a bird.

Summary of the film “Spies in Disguise”.

The following is a summary of the spoilers. 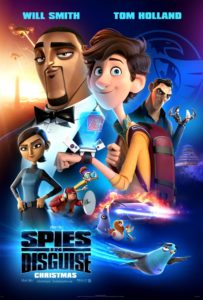 H.T.U. (Honor, Trust, Unity and Value) is a secret global organization created to end terrorism. H.T.U.V.’s chief agent… – is the arrogant Lance Sterling. Sterling’s last task is to return the Stormtrooper to Japanese arms dealer Katsu Kimura (Masi Oka) before it falls into the wrong hands. When the buyer of the drone, a cyber-terrorist named Killian (Ben Mendelsohn), shows up, Sterling rushes against the orders of his boss, Director Joy Jenkins (Reba McEntire). Sterling defeats Kimura and his gang and manages to escape with a briefcase containing a drone. When he returns to H.T.U.V. headquarters, Sterling confronts scientist Walter Beckett (Tom Holland) about equipping his suit with a non-lethal weapon. Walter tries to convince Sterling, that there is a more peaceful way to save the world. Sterling disagrees with Walter’s approach and fires him, before he can explain his latest invention, the biodynamic cloaking device.

Soon after, Sterling goes to a meeting with Jenkins to discuss his mission. But they discover that the case is empty. Sterling immediately confronts Marcy Kappel (Rashida Jones), an Internal Affairs agent who accuses Sterling of treason and reveals footage showing Sterling leaving the building with the drone. In reality, Killian used a holographic disguise to steal the drone. Sterling tries to convince everyone of his innocence, but when no one believes it, he runs away from the drone and decides to hunt down Walter to help him disappear. At the same time, Killian breaks into the armory of the H.T.U.V.

At Walter’s, Sterling unknowingly takes one of Walter’s last concoctions and turns into a dove. Before Walter can begin making an antidote to put Sterling back, Marcy and the other H.T.U. agents begin chasing them through the city. Walter and Sterling escape in Sterling’s spy car. After dismantling Marcy’s group, Sterling and Walter track down Kimura at a resort in Playa del Carmen, Mexico. They learn that Killian is in Venice, Italy, just before Marcy and the H.T.U. show up to capture her. They escape again and head for Venice. Along the way, Walter tries to find an antidote, but fails every time.

Once in Venice, Walter meets the H.T.U.V., who does not recognize Sterling because of his bird shape. Marcy tells Walter that she knows his mother Wendy (Rachel Brosnahan), who was a cop killed on duty. Marcy tries to persuade Walter to help Sterling turn him in, but Walter refuses. Suddenly, a drone distracts the H.T.U. team, allowing Walter and Sterling to escape. Eventually, they discover a drone with a database of H.T.U. agents.

Walter manages to bring him back. But Killian arrives and takes over the database. Killian prepares to kill Walter, but hundreds of doves, summoned by Walter, distract Killian and allow Walter to escape. Killian assumes the holographic form of Sterling and escapes the H.T.U. team. Marcy sees that this version of Sterling has a robotic arm and begins to wonder if she is hunting the right person.

Walter and Sterling use the submarine. Walter reveals that he is tracking Killian and using it to find him in the weapons factory. Walter also manages to perfect the antidote and makes Sterling human again. The pair arrive at Killian’s hideout, but Sterling is concerned for Walter’s safety and sends him to a submarine. Sterling is left alone facing Killian, but is shot and captured. Killian reveals that he has hundreds of drones in mass production and plans to attack everyone in the agency using the database. Killian reveals that he wants revenge for his crew being killed on a previous mission led by Sterling. Walter tries to return with the submarine, but Killian destroys it. Walter survives thanks to one of his inventions, the inflatable stuffed toy.

Walter releases Sterling. The two escape from Killian’s hideout and ask Marcy to support them. At the same time, drones approach H.T.U. headquarters in Washington. While Sterling, Marcy and the rest of the H.T.U.V. team are at loggerheads with Killian, Walter attempts to hack Killian’s bionic arm to gain control of the drones. Killian sees through Walter’s plan and tries to escape with the drone. Walter grabs Killian and flies into the air. Walter manages to hack Killian’s arm and disable the drones. Killian and Walter fall from the sky, but Walter saves Killian by locking him in an inflatable bracket.

Walter falls free to the earth. Sterling, who is again a bird, tries to catch Walter to save him. He is joined by several other pigeons who slow down a considerable Walter and enable him to land relatively safely on the ground. Killian is found by the H.T.U. team and arrested. At H.T.U.V. headquarters, the drone army can’t drop to the ground.

A few days later, Sterling and Walter were banished from H.T.U. again after saving the world. But shortly after, they are kidnapped by Marcy and the H.T.U.V. team. Walter is offered a new top-secret position because H.T.U.V. wants to adapt more peaceful ways for Walter to fight the bad guys. Walter agreed on the only condition, that Sterling be part of his team.

More information about the film