Something fishy in films –

Some time ago, I saw “Johnny Gaddar” by Sriram Raghavan again. The film tells the story of five men who run a gambling house and get involved in drug dealing in the hope of making big profits. Each of them deposits a fifth of the amount needed to make the purchase. However, the money disappears when one of the members of the Vikram gambling house (Neil Nitin Mukesh) decides to keep it for himself. This is a great film with a lot of details and references that can be absorbed separately from the plot. There is an interesting scene at the beginning of the film where five fish are lined up in the kitchen with “gang” written on them. In the next moment, a man puts red sauce on the fish and smears it. In a way, the film has already given a clue about the fate of its main characters. They are all going to die. The five fish are the five gang members, and the red sauce is blood.

Fish led me to another sci-fi thriller, Six Feet Under by Navdeep Singh, which also uses metaphor in a different way. Satyavir (Abhay Deol), an engineer working for the government, is approached by a woman named Manorama (Sarika) to investigate her politician husband P.P. Rathore (Kulbhushan Harbhand), whom she suspects of having an affair. But as is so often the case, not everything is what it seems, as Satyaveer discovers other fascinating layers in a society where everyone seems to be morally corrupt. Set in the desert town of Lahot, the film uses fish – an organism never found in the desert – as the leitmotif of the entire story. Satyaveer has an aquarium in his house, and many of his scenes are filmed next door, looking closely at the fish that live in it. Other characters like P.P. Rathore are also present alongside the fish. Shetall (Raima Sen), Manorama’s neighbor, has a goldfish and calls it Shakuntala. 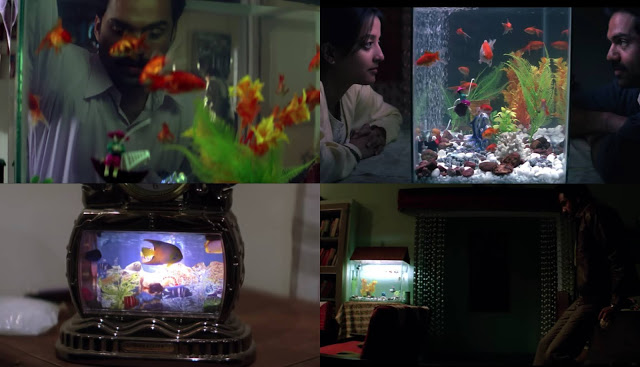 Too many fish scenes in the film seem excessive, but they also show different power dynamics and hierarchies among the characters. At one point, Satyaver’s brother-in-law and municipal police inspector Brijmohan (Vinay Pathak) talk about fish. He warns Satyaver not to interfere in the lives of adults. He says, “Yeh hum jaise chhoti machhliyon ke bas ka rog nahi hai. Yeh neta log bahut badi machhli hain. Aur tanne toh pata hi hai badi machhliyon ko kya khana pasand hai? Satyaveer adds “Chhoti mahli”. Small fish like these cannot participate in the games of corrupt overlords. Politicians are big fish who like to play with small fish like them. Eventually, Satyaveer meets Rathore at his home. He has an aquarium in his house that contains some big fish compared to those in Satyaveer’s house. He also has a seahorse that looks a bit scary and menacing in the scene. When Rathore arrives, he feeds the fish and calls Satyaver an insignificant little man, and then he says that the world is divided into two parts, the strong and the weak. He goes on to speak of the law of nature according to which the hunter catches his prey, and repeats the essence of the comparison of the small and the large fish with Bridgmohan. 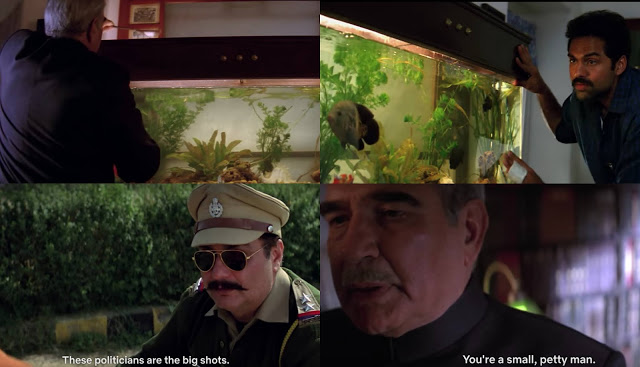 Six Feet Under takes its story from Roman Polanski’s cult film Chinatown, which had a similar story. Private investigator Jake Gittes (Jack Nicholson) is hired by his wife Evelyn Mulvray (Faye Dunaway) to investigate the affair of her husband Hollis Mulvray (Darrell Zwerling), who is later found dead. Jake’s investigation reveals a trail of corruption, deceit and dark family secrets. Chinatown also uses the metaphor of the fish as featured in the Six Feet Under panorama.

The fish first appears in Chinatown when Gittes follows Hollis Mulwray to the shore and sees him pick up a starfish. Later, Jake meets Mulwray’s Executive Officer Ross Yelberton (John Hillerman) and goes to his office. In the cabin hangs a huge fish, a blue marlin, and many other signs and pictures of Yelberton in fishing gear. There is a picture of the fish in a glass frame with the initials A.C. on the side. In a beautifully shot scene, Jake turns to the fish and we see a reflection of his face next to it. There seems to be nothing suspicious in this shot, but this detail initially provides a clue that eventually becomes crucial in piecing together the puzzle of the mystery.

Later in the film, Jake is attacked by Claude Mulvihill (Roy Janson) and another man (Roman Polanski) as he is searching around the dam. The other man warns Jake not to stick his nose in and literally cuts off his nose with a knife. He adds, “The next time you lose everything, SEAL, I’ll cut it off and give it to my goldfish, you understand? This is also the scene on TV when Satyaveer watches Chinatown in Manorama’s Six Feet Under, an homage to the original filming of the movie. While this goldfish scene is playing out on screen, Satyavir gets a call from Sheetal that he has lost his goldfish. In Chinatown, the goldfish is only mentioned in passing, but in the film Six Feet Under, he is a minor character and is referred to as “Shakuntala.”

Later in Chinatown, Jake is invited by Noah Cross (John Huston), Hollis Mulvray’s stepfather, to help him find the girl with whom Mulvray had an affair. Cross and Jake have lunch together and the fish reappears. Jake is presented with a fish with one eye and one head, which is a bit unpleasant to look at. Cross adds, “I think they should be served with a head.” He recalls the time police found Mulvray’s body with his eyes open and fished him out of the water.

Later, Jake and Evelyn visit a retirement home and see a group of women sewing fish onto a flag. Jake asks the woman where she got the materials for this. The woman replies that they got everything from the Albacore Club, adding, “Albacore. It’s fish. My grandson is a member (of the club) and they take very good care of us”. It all begins to make sense to Jake. Cross and his corrupt partners in the Albacore Club, an exclusive group of wealthy fishermen, have created a drought in the city. These wealthy patrons bought land at bargain prices from farmers on behalf of the residents of the retirement homes. Once the proposed dam was built by the government, the land would become fertile and they could make millions by selling it. The flag with the initials A.C., which was on display in Yelberton’s office, was nothing but a reference to the Albacore Club, proving that government officials were playing under one hat with Cross. Chinatown uses the fish as a subtle reference to the game Cross plays. Hartzog’s website gives color to the film’s use of albacore: “White tuna has long been the staple of Southern California’s sport fishing industry. In the ’30s and ’40s, in Balboa, Newport Beach and Catalina, albacore was king. Flags of albacore were ubiquitous. Sport fishing boats flew flags of albacore to indicate a successful catch. The filmmaker’s decision to make the albacore an important symbol did not come about by accident. The film plays with allusions to this famous fish”. As we saw in Chinatown, albacore is used as a symbol of power. Manorama Six Feet Under also uses the fish to represent power structures, but adapts it to its context.

Rohan Sippy also uses fish in his caper comedy Bluffmaster! Fish to represent the hierarchy of humanity. The film tells the story of a con man, Roy (Abhishek Bachchan), who is diagnosed with brain cancer. He lures the small-time hustler Dittu (Rite Deshmukh) to teach him the ropes. They devise a plan to swindle Chandru (Nana Patekar), who has taken all his savings from Dittu’s father. At the beginning of the film, Roy calls the world an ocean and compares his con artists to different fish. At the bottom are almonds or anchovies, which are small. They taste good with drinks, but you have to eat a lot of them to feel full. Likewise, the cheater has to eat at least fifteen to twenty of them to fill his pockets. Then come the goldfish, which stand out on the outside but in reality have nothing to do with wealth. Above them are the bangda or mackerel, which are the most popular in Mumbai. They belong to the professional working class, such as sales and marketing managers. Then there are the Pomfrets, who include people like TV stars, doctors, lawyers and small business owners. A scammer can hit the jackpot and relax for the rest of the month. At the top are the Whales, which consist of the super-rich, such as big industrialists, stockbrokers and the like. They rule the world like whales rule the ocean. 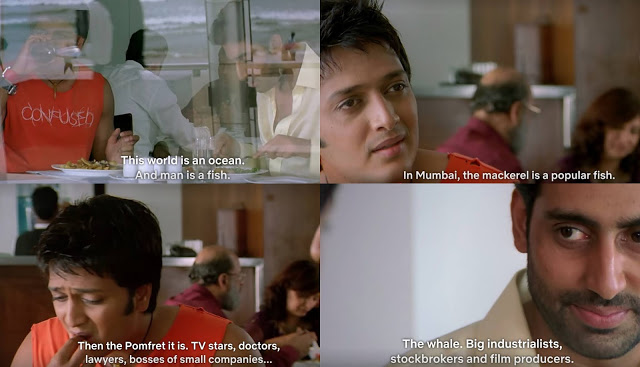 As in other films, references to fish continue to occur in Bluffmaster! Also. The characters talk about baitfish. Roy steals a few and calls them “fried.” At another point, Roy tells Ditt that he is not a fish, but an alligator. Later, Roy calls Chandra a shark who is fast, smart and dangerous as they plot to trap him. At the end, the final bluff of the film is called and it turns out that it is Roy who has been deceived throughout the film. It is the whale who has been attacked by his girlfriend Simmi (Priyanka Chopra) to teach him a lesson that will make him see the value of people. The poster of Bluffmaster! also uses different fish to introduce the actors and under the tagline it says “Come and fish”. The movie has a title of the same name, “Come Fishing” (Bluffmaster! Theme). Bluffmaster! has a cool and stylish atmosphere and does not feel dated even now. 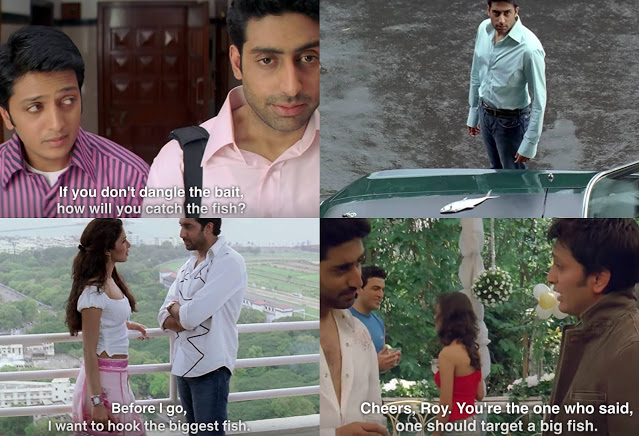 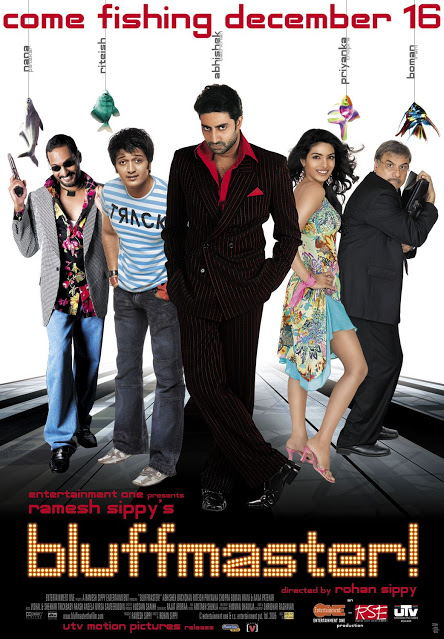 Films with references to animals are not new. Many have done so in the past. But what interested me was that three (sort of) different thriller films – Johnny Gaddar, Manorama Six Feet Under and Bluffmaster – use the metaphor of the fish to represent people and power. Whatever the biology, power belongs to the minority. And if anyone tries to usurp that position, power will do everything in its power to prevent it. The events of the past few days regarding GameStop and Robinhood reflect the same thing. As Noam Chomsky said, “For the powerful, crimes are the crimes committed by others.”

To learn more about the author’s work, check out his blog here].