After an unknown disaster, Adam (Alex Knapp) is on his own. The only inhabitant of an empty and unchanging world, at least that’s what he thinks. When he tries to stay in the desert, visions come to him – on a fateful night when his best friend Kyle (nor Davies) introduces him to the love of his life, K (Olivia Luccardi).

As Adam’s state of mind begins to unravel, he is tormented by lingering questions and the uncertain reality of his world. His understanding of what remains begins to crumble, leading him into a series of unintended consequences and unexpected truths.

Go / Don’t Go is a post-apocalyptic psychological thriller that oscillates between a forgotten love story and inescapable paranoia.

They’re good, thank you. It is always a bit stressful, and this year it seems a strange combination of more stress, but also more free time. It’s an interesting mix.

Are you in L.A.? Did the pandemic affect your career?

I’m actually in the Hudson Valley in New York City, just a few hours north of the city, but I do a lot of work in New York, and the pandemic has had a big impact. I was usually out of town a couple of times a month for projects and meetings with clients/colleagues, and that helped me a lot. I run an independent production company (A+M CREATIVE) and with all the closures and the fear of dangerous working conditions, many projects have of course been delayed or cancelled altogether. It has been a difficult time, but everyone is in the same boat and you find ways to stay productive and try to keep working where you can. Numerous meetings on sizing and processing were held remotely with various customers.

What about the plans for the release of GO/DON’T GO – Any Effect?

Yeah, absolutely. We’re now in the middle of our festival – it’s going very well and has pleasantly surprised us with the number of festivals we’ve been accepted for, and then it happened mid-March and got a bit bigger.

As an independent film, the ability to play at festivals is an important part of the process of finding distribution. It is also widely regarded as a kind of light at the end of the tunnel after years of work on an exciting project like this. Everyone is very excited about networking, promoting the screenings and showing the film in person. Unfortunately, with the arrival of the covide pandemic, many festivals have been cancelled, postponed or completely virtual, which has certainly hampered our plans to connect with people in the industry and our film in these situations.

There were a few dark months when we felt that the momentum we had taken for the film had been lost and might not be regained. Fortunately, a colleague who helped us market the film during the festival introduced us to Kyle Greenberg from Circle Collective, Andrew Van Den Houten and Han Soto from Kamikaze Dogfight, and Max Gardner, our producer, sent them the script and started talking about the relationships with the distributors.

Even before the pandemic we had several other distribution proposals. They were taken out of circulation unnoticed during the first total failure, which for us was a pandemic. That didn’t necessarily put us in a better position to quarantine, ha. But in the end it worked, it only took a little more time and a more winding road to get there. 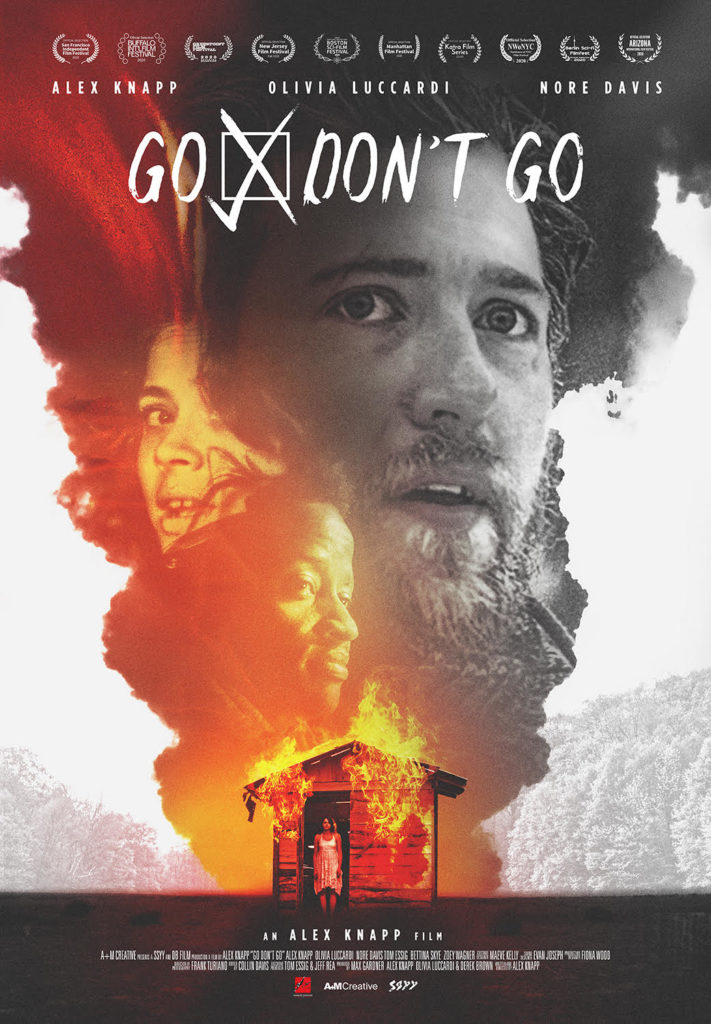 Would you say that the tone of GO/DON’T GO is similar to that of all the projects you have worked on before?

It’s certainly not the same tone, and it was kind of my conception. It’s interesting to see that I come from a comedy background, after years of studying sketching, improvisation and stand-up and finally studying in several independent comedy films. I really wanted to prove that I could create and play more dramatic roles, and I wasn’t sure I would be offered them given the projects I had been involved in before. Part of me felt that comedy limited what I could do visually and in performance, and in a way it was like growing up or just being creative for myself.

Although it is a science fiction film, it is one of the most unique in a long time. Can you tell me about some influences on the script?

Yeah, thanks. Unique is good! The idea for the film and the script certainly came from a personal place. These are just some of the emotions and feelings I had to deal with at the time. A few ideas about the genesis were offered to me one night in a strange dream/nightmare. Isolation, desire, being stuck, overcoming past love – that sort of thing.

But I also wanted to make a unique and strange film – a kind of obscure, fictional science fiction film. I saw all those recent sci-fi movies where the hero saves the day, and I thought to myself: What if the last survivor doesn’t have a plan and can’t even save himself?

The hope is that at the end of the film we think less of what happened to the others and feel more the emotional impact of this character’s journey.

But have you ever seen a classic and similar film for ….. for any reason?

Yeah, 100%. We had a long list of comparison films and inspirations. Basically a series of films for every aspect of the film and the story, both visual and narrative.  I’ve seen a lot of post-apocalyptic isolation films, like The Road, and especially The Rover had a big influence (which I didn’t know). But I also touched on more esoteric types of feature films.  Things like Santango Bela Tarr, especially the scene in Girl Walking with a Dead Cat, and Jerry Gus Van Sant are basically movies where most people would say nothing happens, but I found it super interesting. And then we found more inspiration in the editing process, films like Shane Carruth’s Upstream Color, which we found edited in a super interesting and unconventional way, and we wanted to have parts of it in our film.

Go/Don’t Go will be published on the 12th. January 2021: release on digital and cable VOD platforms.