If you haven’t yet watched the latest notable Netflix series Firefly Lane, we highly recommend you check it out STAT. Featuring Sarah Chalk and Katherine Heigl (Grey’s Anatomy) from Scrubs, the series tells the story of a friendship that spans three decades. It will make you laugh, cry and tug at your heartstrings like you’ve never seen before.

Now you can imagine that creating a series that jumps in time will be a real challenge. This challenge was taken on by costume designer Allisa Swanson of Firefly Lane, whom we had the privilege of interviewing by email.

Allissa’s work speaks for itself when you consider that she has been featured on ABC’s fantasy series Once Upon A Time and CW’s The 100, among others. If you’ve seen either of these shows, you can already imagine Alyssa’s incredible creative mind.

Discover our conversation with her below!

How did you get into costume design?

I have always had a passion for art, dance and theater. Then I discovered sewing in eighth grade. In ninth grade, I drove my teacher crazy for choosing velvet and silk as my fabric, and in tenth grade, my sewing teacher, Mrs. Miller, took me to a drawing class in twelfth grade. Combine that intensity for sewing and design with a flair for theatrical productions and a love of film, and you immediately had a costume designer. Once I knew I wanted to be a costume designer, I got my license in Los Angeles, went back to Vancouver and started working.

I always start with the script or, in the case of Firefly Lane, the book. I take all the information about the character from what is written, I take notes and put the vision in my head. Then it’s research, research, research!

We started preparing for Firefly Lane two months before we shot. Before that, however, I made almost all of the mood boards and collected photos on Pinterest daily. We began working in the sewing studio almost immediately after my assistant designer, Katherine Wigzell, and coordinator, Katie Darby, began working with Sarah. We were able to work on her look right away, which helped us a lot. Because I had done so much research, I immediately got to work designing shelves with options for Kate and Tully, making at least 5 sketches for each to begin the building process and filling in the gaps in what we had bought at thrift stores. We didn’t have an illustrator because I usually do my own work. However, I was so busy with this series that I almost always just did sketches of most of the things we did and never really had time to do color illustrations.

In the meantime, we sourced all the fabrics locally and online so we could start construction as soon as the designs were ready. Some of the things we made were items that I designed first and then chose fabrics to design, sometimes it was a piece of fabric that was used as the basis for the design. You never know what will start the design process. (I once designed a dress based on an image of the inside of an ice cave).

For their first fitting, Sarah “Kate” and Katie “Tully” both had 3 choice racks for the 1980s and 2000s. Even Ben, “Johnny”, had almost 2 racks for each period for his first fitting.

I am very picky when it comes to objects that resemble my vision. Therefore, I am also very picky about my technical sketches when I give them to my editor Alina Babia. We go over all the details to make sure the final design is exactly how I want it. We also used some of my vintage designs, including Kate’s blazer from the 80s, her blouses and a pair of Tully shells from the 80s. So when things came up on screen, they looked a lot like my original sketches.

How often do you collaborate with other departments and how does that work?

Before I started, I had several conversations with our cinematographer about color washes from different decades. Props and costumes ALWAYS worked together on this project. I think the props buyer, Joseph, spent as much time in our office as he did in his. The props are eyeglasses, watches, engagement rings, backpacks, bags, competition scarves and sometimes handbags. All of these things, of course, had to go along with the way we dressed the characters. Most of the bags were turned into costumes, but we also worked together when the props fell on their amazing finds.

For hair, makeup and costumes, there was a drop box that we used for our research during the time periods, so we could work together from the beginning. 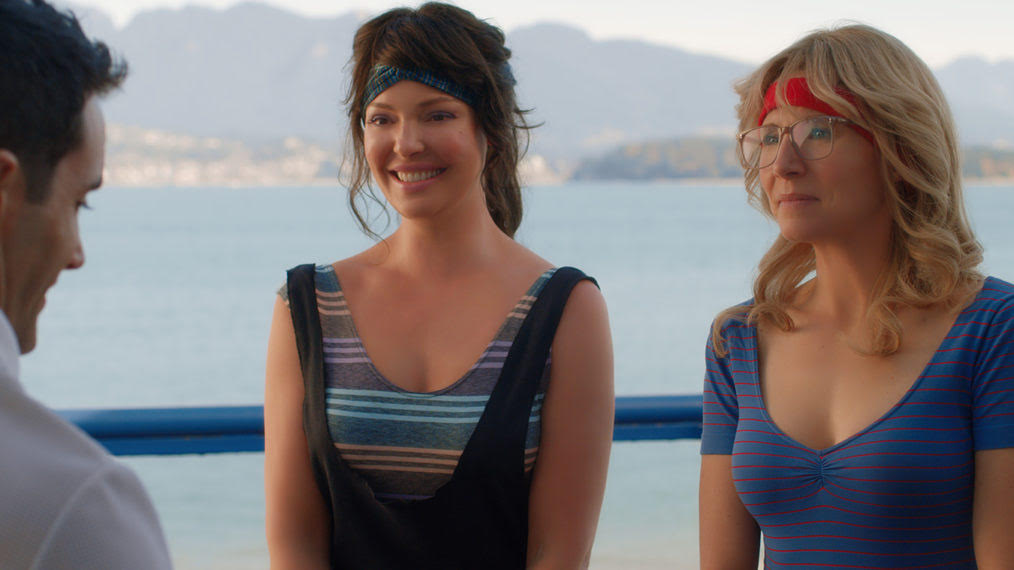 What kind of research is being done on the topic of costumes?

The costume designer uses everything. Magazines, paintings, artwork, people on the street, TV shows, news, movies. I love Pinterest, I have a million folders for everything from interior design to drinks to Alexander McQueen and of course Firefly Lane. Google, and the magazine chapter section is also my favorite.

Time has always been a challenge. Especially in the 1970s, it was always intended to have a sense of summer laziness, but when we moved to the Pacific Northwest in the fall and winter, we had to work harder. Heated tents, cozy jackets and hot spots in the actors’ pockets and backs helped us get through it. Much of the operation was done with women donning clean hoses to get an extra layer not shown to the camera. Hot water bottles under the blankets they sat on were also common.

You’ve worked on several genre series, including Once Upon a Time, The 100, and now Firefly Lane. What is your favorite type of work and why? Is there a genre you haven’t worked on yet, but would like to work on?

I would love to do fantasy or SCI-FI, like Lord of the Rings or Game of Thrones or Star Wars or Guardians of the Galaxy, where you build whole MOUNTS. This is my dream, 100%. 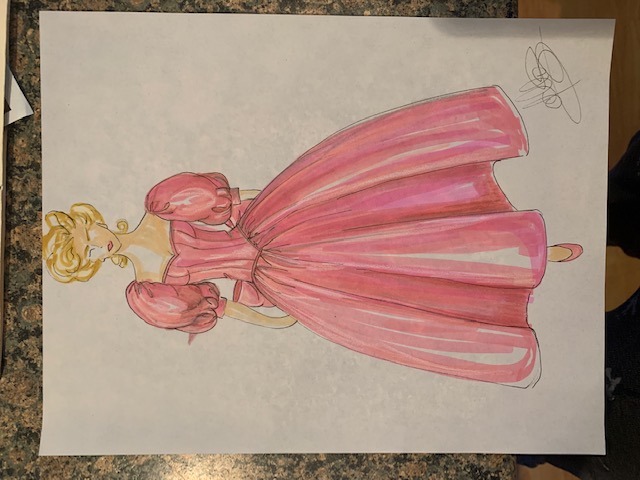 In “Firefly Lane” you had to deal with characters who have been in each other’s lives for three decades. How do you handle a situation like that?

You need to start with the basics of who each character is and the story they have to tell.

As the characters get older, you have to think about how they will change. How did you overcome this challenge?

Frankly, it helps that I am about the same age as Tully and Kate in 2003, so thinking about how my style and that of my peers has changed has influenced many of my decisions.

Did you research each decade of characters to better understand how you would make the costumes? What were your favorite moments in this process?

Each decade had its own portion of time for research because they are so different and needed to be immediately recognizable on the screen as we moved forward in time.

I used real patterns from that time in the 1970s, many of which I collected from my grandmother and over the years since I started sewing. The Sears and Eaton’s catalogs were a huge source of inspiration because they covered the clothing of the “common” man. I used magazines from my collection and others found in thrift stores and on Ebay, pictures from the internet, and movies from the 70’s and others that are old movies.

I used the same sources in the 1980s, plus my own photo albums from childhood.

In the 2000s, there was more research on the Internet and on my own photographs, films and TV shows from that time.

After we gathered all the mood boards, we printed each board as a poster and hung it in the office so you can look at it anytime. It was at the very beginning of the preparation, but I loved it because visually everything was presented to us as a fashion roadmap. 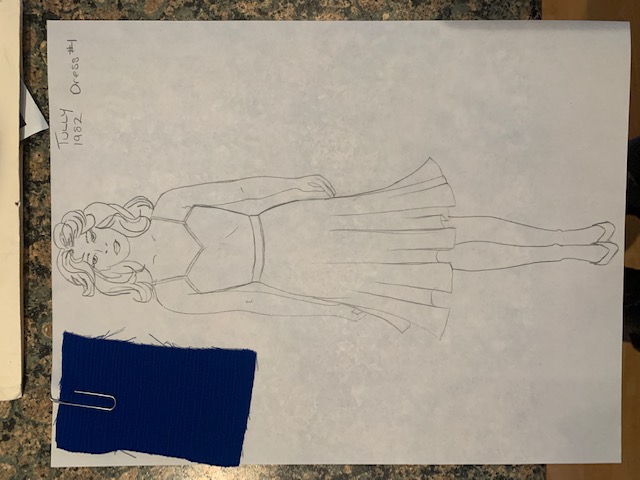 Where will we see your work?

I am currently designing the first season of Turner & Hooch for Disney+.

Any advice for future costume designers?

Start at the bottom and work your way up. This completes your knowledge of how the costume department works and increases your problem-solving skills. The knowledge you gain from sewing is also very useful. Being able to apply fits correctly or explain in detail to your editor how your actor should dress can be extremely helpful and increases your chances of success. There are also so many positions in the department that you don’t have to be just a costume designer. You can find other areas of the department that appeal to you more. The vision has no chance without a great team to bring it to life on screen from start to finish.

Does this interview inspire you to become a costume designer? Share your thoughts and comments below or head over to our Twitter, @TheSeriesRegs to start the conversation!